The Legend and the Name 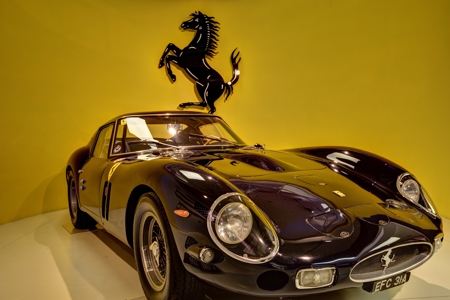 It's now nearly a year since we moved to Maranello and I work for Ferrari. Life has been, still is and very likely will be for the foreseable future really busy, so it is easy to be swamped by the inevitable routine of the job, the pressure of the responsibilities, and fail to appreciate what it actually means being here. But a while ago I had some free time on a Saturday morning, so I decided to pay a visit to the Ferrari Museum in Maranello. Armed with my loyal Nikon camera, I left all the thoughts for the ongoing racing weekend on the side and just concentrated on what was on display before me. Welcoming the visitors was first of all a black Ferrari 250 GTO. I immediately started snapping away, as I usually do, thinking how best to frame the image avoiding too much reflections from the spot lights. Shall I use the flash? Or I shall I give a hint of HDR treatment in post processing to bring out the details of the hand made bodywork? Soon, though, I had to stop and just look. Before me was one of only 39 cars of a kind ever made, a car that is regarded as the most desirable automotive master piece of all times, the model which is to date the most expensive car ever sold at an auction for over 38 million dollars...

Eventually I walked on and next I saw the 1989 number 27 Ferrari which won its first race with Nigel Mansell at the wheel. This is the car which introduced the semi-automatic gear shift in Formula One, and against all odds finished the race without a failure! Suddenly the image of Mansell crossing the finish line is crystal clear in my mind, and I felt the same enthusiasm as if it were happening now, along with more memories of that season which saw some epic battles between Mansell and Senna. Just around the corner was another master piece, the Ferrari 512S sport prototype. I was too little (or actually not even born!) when this car was engaged in epic battles with the Porsche 917 and the Ford GT40, but what I remembered staring at it was lisstening to the recording of its engine sound. How did I do that? Easy, that was from the CD which comes with the book "Into the Red", written by Nick Mason, the drummer of the Pink Floyd! Courtesy of the royalties earned with his music I think he owns a 512S (or M...).

If you are a proper, proper car enthusiast (or shall I say fanatic...) there is nothing more than a screaming V12 Ferrari engine to get your pulse racing. In fact as I was admiring the 512S I thought for a moment of how much the name Ferrari itself evokes speed accompanied by a symphony of cylinders firing in harmony, with a sound that (quoting what von Karajan himself once said) "an orchestra director would struggle to interpret". Was it destiny that the Man who created a legend also had such an appropriate name? Or would it have worked regardless of the name... had he been called Enzo... Sorrentino would I now be working for the Scuderia Sorrentino? And the Sorrentino 250 GTO would stil have sold for 38 million dollars...? Silly thoughts I suppose...!

On the top floor I then saw another one of the Ferrari GT cars of the past which is dearest to me, the 512 BB. After nearly 40 years I still think that the pen which drew this bodywork around Ferrari's 5 litres, 12 cylinder boxer engine was magic. I finally ended my tour on a dark stage where the latest Ferrari supercar was on display. "LaFerrari" is Ferrari's response to the modern environmental and traffic demands. A V12 engine coupled with an electric motor produces not much less than 1000 HP, and is cast into a bodywork to die for. What more would you need for an easy commute A to B? After the F40, the F50, the Enzo... there seem to be no limit to Ferrari's ability to absolutely marvel us with their ultimate road car. But unfortunately my time was up and my visit was over. Back to real life and to work, I can happily report that on that very same weekend of my visit to the Museum Sebastian Vettel won his first race at the wheel of the Ferrari in Malaysia. La Rossa torna a vincere. Forza Ferrari!

You can see my favourite pictures from the Museum here.
News
PreviousNext